thirty-two (the princess and the pea) 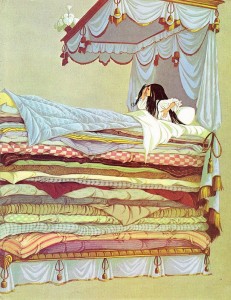 I spent Christmas night sleeping on the floor beside the guest bed in our friends’ home. At one point, in my sleep, I rolled towards the bed – towards you – and must have bumped it. You woke in a sleepy rage. Unwilling to hiss or roar in someone else’s home, you simply kicked me away. Like a dog. The next day, when our friends asked us to take a dip in their pool, I was relieved that you said no. I was not sure whether my swimmers would cover the bruises spreading over my back.

In the car, on the way home, you listed the ways in which I had shamed you on Christmas Day. I had slurped my champagne; I had been too slow coming to the table when you were ready to serve; I had used a paper napkin; I had been open about my opinions regarding gay marriage; I had ‘won’ when we pulled a Christmas cracker, and was still wearing the plastic jewellery it had contained: “as if to make some sort of point”.

Worst of all, I had kept you awake, all night, moving about on the carpet and making “that fucking shushing noise with your fat legs”. As a result you had spent Boxing Day looking, you said, tired and ugly. Old.

It was not unusual for you to evict me from our shared bed. One of the first times was during another Christmas break away from home. I slept on the floor under the window. It would be more truthful to say I lay awake, on the hard floor, listening to the ocean, watching the stars. When morning’s light came fingering through the gap in the velvet curtains I got up and went to the kitchen. You found me there, standing over the kettle waiting for it to boil. The bruise on my upper arm stayed dark and tender for weeks afterwards. Your friends were sleeping, you said, and I was being rude, selfish, hideous by boiling water. Was it not enough to disturb your sleep, now I had to ruin everyone’s rest? I was an idiot, an imbecile. A fool.

At home, it was not unusual for me to wake to you thumping me, or pushing me out of the bed onto the floor. ‘You’re doing it again,’ you would say. ‘Get out.’ You consulted your therapist who, you said, had told you that my nighttime twitching, my rolling over in my sleep, were deliberate acts of provocation and aggression. That I was a passive aggressive person who could choose not to roll over in my sleep if I wanted to, but I didn’t care enough about you and your needs to bother. You raised this, you said, in an effort to help me understand why you could not bear to sleep with me any more. It was my choice, you told me, not yours.

(Later, when I told you that I was leaving you because you were having an affair you refused to end, you said almost the same thing. It was my choice to end our relationship, you said, not yours.)

I practised lying perfectly still. I practised not turning over. Not breathing. Not sighing or yearning or being. I practised being the perfect dead-already woman. For you. Not to please you, any more, just to avoid your rage.

Years later, I remembered a night from very early on. You following me from room to room, pushing me up against walls, spitting in my face, listing for me all the ways in which I needed to change. All the things I had done wrong. And me sinking to the floor, sobbing, pulling my knees up to my chest and saying, over and over and over again, ‘I will never be good enough for you. Nothing will ever be good enough for you.’

I wonder, now, why I didn’t listen to myself. I wonder why I thought I could perfect myself; become the still, small thing you wanted me to be. Smaller, even, than a pea.