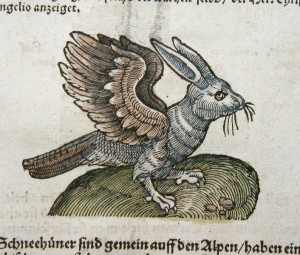 I just wanted to share this gorgeous little snippet Maija Lindbergs wrote in class today, when we were messing about with viewpoint and grammatical POV.

Maija is a final-year student of Creative Media, and she’s AWESOME, as you’re about to find out …

Owlbit was a rabbit by day and an owl by night. His story began with a terrible magician who successfully pulled him out of a hat, but unsuccessfully turned him into a dove. Since the magician had failed, he abandoned the poor rabbit-owl monstrosity and gave up his magic tricks for life. Every time the sun sets, Owlbit does not need to sleep. His owl brain sleeps by day, as his rabbit brain slumbers in the night.

My career is over! Finished! Completely destroyed! You’d think that, after a life-time of training, I’d be one of the greatest magicians by now, aged 47. But no, here I stay, at the bottom of all bottoms, with nothing to show for all my hard work but a deck of cards and, thanks to my hocus pocus, a rabbit that transforms into an owl at night.