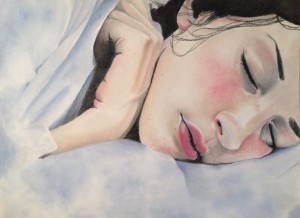 Ten generations ago the queen entered the earth. And each generation has had its drummer. Wee Whittler is ours. Small and dark and sombre, she sits cross-legged on top of the mound, at dawn and at dusk, and patters and pounds the world into waking. Into sleep.

When I was a child I would go with the others–a murmuration of farm-born brats–and stamp over the mound, trying to wake the old queen. Certain that she was not real; terrified that she was. Together we’d sing the lullabies our mothers taught us, and weave ourselves crowns out of the weeds that grew there.

Once, my older brother took me to the mound before dawn, and lay on the ground beside me. The grass was damp; the earth, too. We put our ears to the ground and looked into each other’s eyes as we listened for the beat of her heart. Ba-boom. Ba-boom, he whispered. And I was sure I heard it.

My brother’s dead now. Or lost, at least. He went to fight in the Holy War when I was twelve and has not returned. Better that way, our mother says, looking towards Meddlin’s place. Their boy came back, but it weren’t no blessing. Changed he was, and not for the better.

But things are turning now, I know it. This morning I was crossing the mound–returning home from a night of sweetness–I nearly fell. I had caught the tip of my shoe on something. A pale rock, or a mushroom. I kicked it, but it didn’t move. Only blushed then slowly whitened. Which is not, as you know, the way of rocks or shrooms. So I bent and touched it with the tip of my finger.

Warm it is, and soft with life. The queen is rising from the earth, bringing our own sweet dead in her wake.