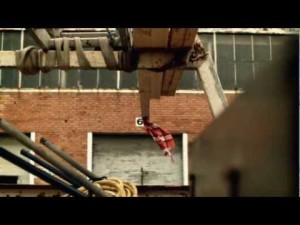 When the job was done, Jared went down to the river and took off his shirt to wash it. Then he walked home, toiling up the long rise to our place. It was late afternoon, and the light had that drowned golden tone it gets at times. The road cut a pale, straggly tunnel through the Bloodwood forest, and up that tunnel he came. That old shirt I’d mended twice now (new buttons, worn cuffs) hung like a strangled thing from his fist.

He was still beautiful. Perhaps it was the last time I noticed it, which made me wonder if he had seen me beautiful for the last time, too, and when that might have been. I wasn’t surprised that he had been made beautiful by putting our little Sue in the ground. I wouldn’t have been surprised by anything that walked out up that road—the place was full of wonders. But as he came closer the late day’s light changed and fell away from him and I could see that he was just an ordinary man.

I don’t remember where he got that shirt, but I remember well enough the night he first put me in it. Buttoned it up over my nakedness and settled me in front of the fire with a glass of red wine. We sat locked together like a Chinese puzzle: legs and arms and hips and eyes. Before we were married, that was, before Pi and Louise and little Sue came, and then left us again. Impatient, his mother said, for the other world.

I used to wear that shirt to bed when he was away working; I liked how putting it on was like putting on the smell of him. And when Pi was small, just that once, Jared wrapped him in it, as if it were an oddly-shaped blanket. Wrapped the arms around and around his newborn son so he was altogether embraced.

We went inside the house. I had lit the fire, but there was precious little warmth to be had. I put my hand where it fit best: in the groove between his shoulder-blades, where I could feel every part of him converge. Slowly, the fire began to blaze, and when it reached its peak he lay the shirt on the flames. Together, we watched it burn.

This microfiction was in part inspired a beer advertisment featuring a shirt, which I first saw while watching cricket on a hot summer’s day. I’ll never forget that heroic line: Never washed! Never ironed!