Twenty-two (the wax, the wick, the flame) 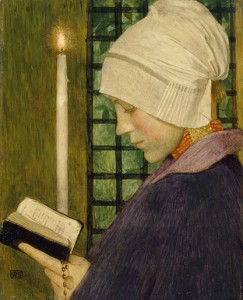 On the afternoon of February second, you brought snowdrops into the house. Armfuls of them, their heads shyly drooping. Every empty jar in the house was filled with them. Then you set freshly-blessed candles on the tables and windowsills alongside the flowers. The scent of flowers and beeswax warmed the house.’They must burn all night,’ you said, shaking out the match’s flame, ‘to keep the wolves away.’

This was in the days when it was still cold in February, when the world was full of forests, and those forests full of wolves.

Your hands often smelt of honey, of bees. The candles were ones you had rolled yourself. The wax stolen from your precious hives; the wicks soaked in salt and acid. Saint Anselm of Canterbury once said there were three parts to consider when meditating upon a blessed candle: the wax, the wick and the flame. The wax, he claimed, produced by the virginal bee’s congress with the flowers, is the Flesh of the Lord. The wick, held like a secret within the Flesh, is his Eternal Soul; the flame that burns is his divinity.*

The next day, when the candles had burned away, you were the one who illuminated the rooms, whose blush heated the air. Your flame, banked low, burned steadily throughout the year. You were everything to me: wax, and wick, and flame.

The source for Saint Anselm‘s statement about meditating on blessed candles during Candlemas (February 2nd) is L’Année Liturgique (The Liturgical Year) by Prosper Louis Pascal Guéranger (Dom Guéranger, abbot of Solesmes), nine volumes of which he wrote between 1841 and his death in 1875; the remaining six volumes were written by another, unknown, Benedictine monk.

According to tradition, in many European countries, snowdrops (also called Candlemas bells) should not be brought into the house before Candlemas. The link between Candlemas Day and snowdrops relies partly on a folkloric/apocryphal story about Eve. After being cast out of Eden, Eve weeps when she first encounters cold, and most particuarly, snow. An angel appeared, and, according to the poem ‘Origin of the Snowdrop’ by the Scotsman George Wilson, the angel ‘bade her cheer / Her drooping heart, and banish fear:’

And catching, as he gently spake,
A flake of falling snow
He breathed on it, and bade it take,
A form, and bud and blow;
And ere the flake had reached the earth,
Eve smiled upon the beauteous birth,
That seemed, amid the general dearth
Of living things, a greater prize
Than all her flowers in Paradise.

And thus the snowdrop, like the bow
That spans the cloudy sky,
Becomes a symbol whence we know
That brighter days are nigh;
That circling seasons, in a race
That knows no lagging, lingering pace,
Shall each the other nimbly chase,
Till Time’s departing final day
Sweep snowdrops and the world away.