(sixty) the forest, the teeth 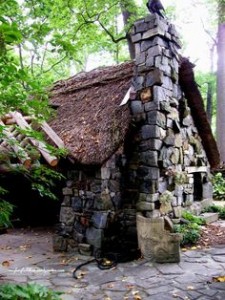 There was a long road into the forest, and I drove down it in my old ute, with the children in the back, bouncing and laughing as we made our way down the rutted dirt road to our new house. The house was made of stones. We walked around the outside, putting our hands into the gaps between the stones to feel the coolness there. There was nothing to unpack, and none of us went inside, instead the children set off exploring and building tiny houses for the fairy folk. And I started clearing trees.

I felled six or seven trees that were too close to the house, chopping them down with an axe, the old-fashioned way. Sweating and dirty and dreaming of a chainsaw. I could hear the children in the woods, calling cooeee to each other and to me.

Then there was the stumping. One of the stumps was enormous, and deeply rooted. The raw top of the stump seeped bloody sap that got smeared all over my skin, and the stump, and the rope I was using the try to haul that fucker out of the ground. It was a bloodwood tree’s stump, so this made sense to me, but I could also smell the blood of animals on my skin and in my hair.

When I stopped to get a drink of water I stood by the ute listening. I could hear owls and wind and wrens, but no children. I called for them, but they didn’t answer. I started crashing through the forest searching for them, screaming their names. My throat was hoarse, and the blood from the tree was welling up in streams and flowing down the sides of the ridge into the lantana. Hours passed like this. Days. I was stumping trees and weeping and bleeding and desperate to find the children. They were in the tree stumps. They were under them. I could hear them down there, somehow, their muffled screams.

Finally, a police car arrived, sirens and lights going. I hadn’t bathed in days. My clothes were torn and stained, with dirt and blood. My hands and arms were full of splinters. My hair was matted. I smelled like piss and sap. The children got out of the back seat of the police car, so clean and strange, and stood in a neat, terrified row staring at me.

They were, and were not, my children. Each of them was holding a large envelope: the kind in which you carry x-rays. They had been to see a dentist in Mannering Park, and each of them had had their teeth x-rayed. They handed me the films. Their hands were cold and they didn’t make a sound. They didn’t smell real.

I asked them how they’d got to Mannering Park, but they refused to answer me. They just stood there in a row, holding their x-rays. I had forgotten their names. I had forgotten my own. I started shaking. I was tired and sore and these were not my babies. They were something else. Something strange. I knew that if they stayed I would come to love them, and I would feed them pieces of myself in order to ensure that they survived.