Wind Knots and the Polychronicon 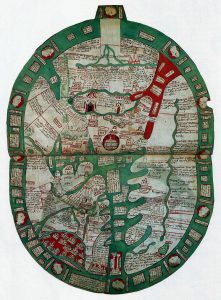 World map in a late 14th-century manuscript of Ranulf’s Polychronicon. Courtesy of the British Library.

The Polychronicon is a chronicle of the British Isles, written by Ranulf Higden (c. 1280-1364), a Benedictine monk of the monastery of St. Werburgh in Chester. Ranulf apparently travelled throughout the north of Great Britain after becoming a monk in 1299, when he was just nineteen years old.

The Polychronicon is a work in seven books (in imitation of the seven days of creation according to Genesis). It is an historical account of Great Britain, Ireland and Wales, including geographical descriptions, and descriptions of key sites throughout the British Isles. The book, whose full Latin title is Ranulphi Castrensis, cognomine Higden, Polychronicon (sive Historia Polycratica) ab initio mundi usque ad mortem regis Edwardi III in septem libros dispositum was quite popular during the fifteenth century. There is a beautiful manuscript kept at Christ’s College, Cambridge, which states that Higden had written the history up to the year 1344. Another monk and scholar, John of Malvern, may have continued the work, and still others carried on after Malvern. Like most tales of antique manuscripts, which exist in various hand-written and illustrated forms, each slightly different from the next, the true authorship of the whole work is a topic of debate among scholars. Old manuscripts are like the oral texts of Chinese whispers: changed as they pass from mouth to mouth, ear to ear, hand to hand.

In 1869, Churchill Babbington and Joseph Lumby prepared a version of the manuscript for the Rolls Series, which was published by Longmans, Green and Co. This version includes the original Latin on the evenly-numbered pages, facing the Trevisa translations and an anonymous 15th century translation, known as MS Harl 2261, on the odd-numbered pages. 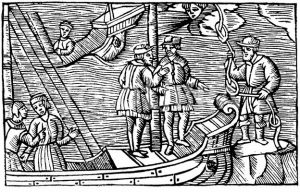 A Finnish man selling wind knots to a group of sailors from the Historia de Gentibus Septentrionalibus, by Olaus Magnus (1555).

My favourite section of the Polychronicon (perhaps!) comes at the end of Chapter XLIV England, continued. The principal division of the islands in a tiny section that, in the chapter summary, is described as ‘The Isle of Man and its superstitions’. Here it is in the three translations (Latin, Trevisa’s 14th-C English, and the anonymous 15thC version) from pages 42 and 43 of the Babbington text:

This may be a medieval extension of the bag of wind referred to in Homer’s Odyssey, a passage which I refer to in the following passage from my novel, Dying in the First Person: 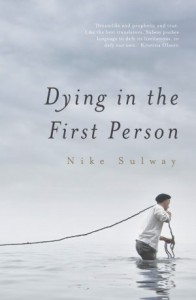 My father had told us many times about the night Odysseus slept. Ithaca – home – had been in sight when Odysseus, exhausted with war and journeying, lay down on the deck of his ship and slept.

His crew, returning to their homes and families without gifts of plunder, thought that the sack Aeolus had given Odysseus contained gold, and opened the sack while he slept. The sack contained the winds: all of them, except the west wind. A gift indeed for a man of the sea. (At this my father threw back his head, opened wide his arms. The winds tangled his hair). The crew opened the mouth of the sack wide, and the great winds roared out, creating a storm. The twelve ships of Odysseus’s fleet were swept out to sea, away from the shore, away from the glow and the drifting smoke of the home fires.

Odysseus woke to chaos. The winds of the south, the north and the east raged about him; his home was once more distant. His crew had betrayed him while he slept. He looked back towards Ithaca and despaired

But I
awakened from sleep, considered in my excellent heart
whether to drop from the deck and die right there in the sea
or to endure, keep silent, go on being one of the living.
(W B Stanford translation)

I’ve been thinking about wind knots a lot the last few days. And am surprised that I’ve returned to the magic of wind; to its terrors and promises for fishers and sailors. I’ve been thinking about women and magic and islands and storms. About women who fish and hunt and fossick. About the women of the new book that I’m working on (as yet unnamed, but it’s work in progress title is Tern). Here’s one of Tern’s voices, emerging:

I will sell you a set of wind knots, but be warned, that first knot may be mild. It may cool your cheek and dry your laundry; it may smell of spring, of apples and babies. The second knot will release an invigorating breeze. A wind that rattles the leaves in the trees, tangles your hair, fills your sail and clears the dust from your heart. But the third … the third will take you far from home. Will dash your boat to splinters and raise waves as tall as mountains. It will pass through you as darkness passes through the moon, leaving you barren, leaving you bereft.

And when the storm is passed, the rope will return to me, made as it is of my own blood and hair. It will come back to my harbour. To my home.