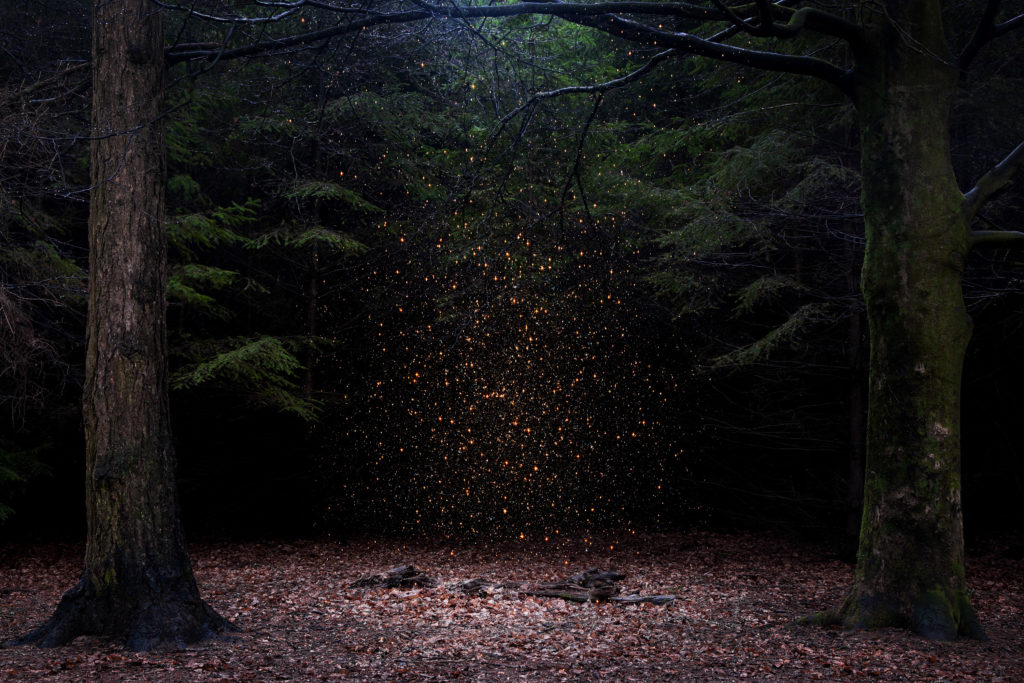 Ellie Davies photograph from her series ‘Into the Woods’. See more of her work here.

Last weekend, I had the enormous privilege of being part of a writer’s event with Kylie Kaden. During Kylie’s interview, she spoke about being a pantser, rather than a plotter, and used the metaphor of driving at night with your headlights on, or walking through the forest with a torch, as a metaphor for the process of writing intuitively.

The basis of the metaphor is that a pantser is the kind of writer who, rather than plan out their work and then follow the plan, works intuitively. They set out into the woods with a torch. They can only see as far ahead as the torch beam illuminates for them. But that’s enough. I’m not sure who originated this metaphor for intuitive writing, but it’s been around for decades.

[Perhaps, to extend the metaphor, plotters only drive in the daytime, with GPS. They know where they’re going, and how to get there, and perhaps even which rest stops they’re going to stop at along the way.]

I’m a pantser, but I don’t go into the woods with a torch, or a flashlight as the Americans call them. I go there undefended, unguarded. Hoping to feel connected to the woods, and the strangeness that abides there.

Have you ever camped in the woods, without a fire, on a summer night. Preferably somewhere relatively remote from the light and noise pollution of man-made environments? If you have, then you’ve probably noticed how many more stars you see. You might also have noticed how quiet it is (at first), and then how much you can hear. The calls of birds and frogs, the rustle of a wallaby in the scrub, the particular soughing and creaking of an old, thick-trunked tree. You might even have had an experience devoid of what we could call ‘smell pollution’: an awareness of the scent of earth, leaves, animals, and stars.

I used to live on a beautiful property in the Sunshine Coast hinterland. One of the things about living there was that our sleeping quarters were separate from the house, with its kitchen, lounge, and bathroom. Every night, I had to walk up the hill (not very far), past the orchard, through the woods. I had a torch, but if I could, I would avoid turning it on. And every night I would stop, take in a deep breath, look out at the sky and the bush. At the world, and wait until I could truly see and hear and smell and feel her.

The year I was born, Edward Abbey published his beautiful work of memoir/nature writing/philosophy, Desert Solitaire: A season in the wilderness. The book includes this stunning passage on light, darkness, and the disadvantages of the flashlight. A vivid experience of the way that technology can come between us and the world:

I have a flashlight with me but will not use it unless I hear some sign of animal life worthy of investigation. The flashlight, or electrical torch as the English call it, is a useful instrument in certain situations but I can see the road well enough without it. Better, in fact.

There’s another disadvantage to the use of the flashlight: like many other mechanical gadgets it tends to separate a man from the world around him. If I switch it on my eyes adapt to it and I can see only the small pool of light which it makes in front of me; I am isolated. Leaving the flashlight in my pocket where it belongs, I remain a part of the environment I walk through and my vision though limited has no sharp or definite boundary.

This peculiar limitation of the machine becomes doubly apparent when I return to the housetrailer. I’ve decided to write a letter (to myself) before going to bed, and rather than use a candle for light I’m going to crank up the old generator. the generator is a small four-cylinder gasoline engine mounted on a wooden block not far from the trailer. Much too close, I’d say. I open the switch, adjust the choke, engage the crank and heave it around. The engine sputters, gasps, catches fire, gains momentum, winds up into a roar, valves popping, rockers thumping, pistons hissing up and down inside their oiled jackets. Fine: power surges into the wiring, the light bulbs inside the trailer begin to glow, brighten, becoming incandescent. The lights are so bright I can’t see a thing and have to shade my eyes as I stumble toward the open door of the trailer. Nor can I hear anything but the clatter of the generator. I am shut off from the natural world and sealed up, encapsulated, in a box of artificial light and tyrannical noise … I have exchanged a great and unbounded world for a small, comparatively meagre one …

After finishing his letter, Abbey goes outside and turns off the generator …

The light bulbs dim and disappear, the furious gnashing of the pistons whimpers to a halt. Standing by the inert and helpless engine, I hear its last vibrations die like ripples on a pool somewhere far out on the tranquil sea of desert, somewhere beyond Delicate Arch, beyond the Yellow Cat badlands, beyond the shadow line.

I wait. Now the night flows back, the mighty stillness embraces and includes me; I can see the stars again and the world of starlight. I am twenty miles or more from the nearest fellow human, but instead of loneliness I feel loveliness. Loveliness and a quiet exultation.

So, here’s my secret sense of how I write. And why. The torch theory of pantsing suggests a particular kind of focus on what’s immediately in front of you, what’s visible and clear. But I like to try to write in a way that engages with the barely perceptible. That is quiet and patient and dim. Not with a plan, not with a torch, not by peering into the cones of illumination created by my car’s headlights.

Here’s my advice: stop the car, turn off the engine, turn off the lights and the radio and your phone and your apple-watch. Take off your shoes. Step into the woods and wait for the night to flow back. Wait for the loneliness to recede, and for the world to expand beyond the shadow line. Wait to feel the loveliness that waits for you there. Wait for the feeling–the sense–of exultation.