This image is one of five illustrations Jon Bauer did for the 1908 publication of Helena Nyblom’s Svanhamnen. Bauer was a wonderful Swedish artist and illustrator, best known for his illustrations of folk and fairy tales. His detailed, imaginative and emotionally engaging compositions influenced other artists working on children’s illustration, notably Arthur Rackham, Kay Neilsen and Edmund Dulac.

I adore this particular image – the story is similar to that of the selkie; the swan maid has lost her swan skin, which allows her to transform into a swan and fly with her sisters. The autumn leaves fall like tears around her as she stands on the hilltop – as close to the sky as she can be – watching her sisters strike out across the sky. The opposing directions and movements are suggestive: The swan maiden is tied to the earth; her sisters free to fly away. The heavy black brocade of her dress in stark contrast to the pale, slim shapes of her swan-sisters. Do swans migrate in the autumn/winter: certainly the illustration seems to me to suggest a leave-taking. The sister left behind alone to mourn for her old form, and her old life. 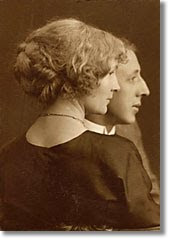 The image seems, to me, imbued with delicacy and sadness. Bauer’s wife, Esther Ellquist, who was also an artist, was the model for many of his paintings and illustrations – the illustration of the svanhamnen seems, I think, to be modelled on her.

Bauer was a prolific, though short-lived, artist. It’s a shame his work isn’t better known in the English-speaking world, though it has made some surprising inroads. The aesthetic of the Jim Henson/Frank Oz film The Dark Crystal was inspired by his work, particularly his illustrations of trolls (an influence that extends, too, into the later film starring David Bowie as the Goblin King: The Labyrinth). Bauer also influenced modern artists and illustrators of the magical realm, such as Brian Froud.

Bauer died very young – at 35. It was 918: the world was at war, and things were difficult at home, too. Bauer and his wife had come close to divorce. Bauer was struggling with depression and self-doubt. He and his family decided to move to a new home, to start afresh in Stockholm. He booked passage on the Per Brahe ferry. Bauer, his wife, and their three year old son, Bengt, were all drowned when the ship was wrecked and sank in Lake Vattern.