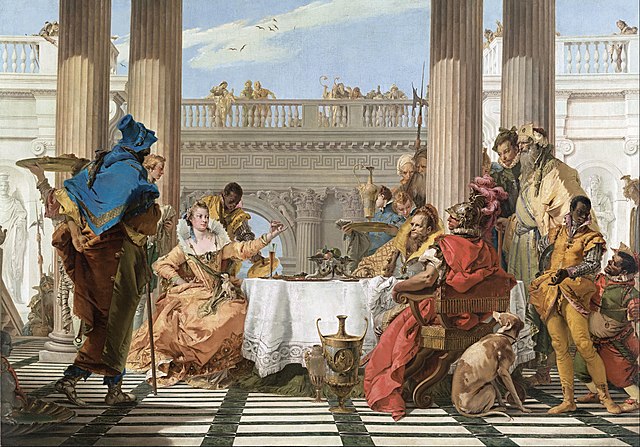 In Book IX: lxviii of Pliny the Elder’s Natural History, the author tells a story about an unusual contest between Cleopatra VII Philipator (69-30BCE), and the triumvir of Rome, Marcus Antonius (83-30BCE).

This extraordinary story is the subject of an enormous work by Giambattista Tiepolo: Banquet of Cleopatra (1743-1745). At 250.3 x 357 centimetres it takes up almost an entire end-wall of the NGV gallery space in which it hangs (it is currently on display in the “17th to 18th Century European Paintings Gallery” on Level 2), dwarfing those who came to stand before it, though the piece also has something of a trompe l’oeil effect. When Tiepolo paintings was housed within the great Palazzo Labia of mid-eighteenth century Venice, visitors were said to be unable to easily discern between the painted feasters, jokers and servants on the walls, and those in the room. This was partly due to the incredibly realism of Tiepolo’s figures, but also due to the attention he paid to the loggia where the feast is taking place. Tiepolo employed a master of perspective drawing to draw in the tiled floor with multiple vanishing points so that, as you move around in front of the painting, the floor still looks real.

According to Betty Churcher**, the painting was acquired by the NGV in 1933, after first being offered to the National Gallery in London by the Hermitage in Russia. The trustees of the National Gallery were offered the painting for £30,000 but they “couldn’t agree about the picture, and furthermore the Foreign Office didn’t want a London institution to help the Bolsheviks by supplying ready cash”.

Their loss was our gain. Two years later, in April 1933, the painting was offered to the Felton Bequest for the NGV for £25,000 (the final cost, with commissions and so on, was £31,250). Mr Sargent, the agent for the Felton Bequest, “remembers well how he carried payment made at the request of the vendor in bundles of small currency across Trafalgar Square in a suitcase” (quoted in Anderson***, p 175).

This is an astonishing painting: overwhelming, even. There are some beautiful commentaries on the painting, particularly in terms of how it sits in relation to Tiepolo’s other Cleopatra works, in Roberto Calasso’s book Tiepolo Pink (. In his discussion of the painting’s subject, Calasso notes:

The wager between the two lovers was about power. And Cleopatra proved that Oriental power, by then enfeebled, nonetheless went far further than the new Roman power. It is not enough to consider any thing as an object of conquest. It is also necessary to be prepared to destroy it in a totally arbitrary manner. Only pure destruction makes it possible to reach a higher level, inaccessible to mere power.

All of which is, I think, deeply fascinating when you consider the three black subjects of the painting. One standing just behind/to the left of Cleopatra as she prepares to drop her earring into her glass, and the other two of whom stand off to the left side of the painting: the taller man in a subtle echo of Cleopatra’s attendant in terms of his stance and the direction of his gaze.

Cleopatra’s arm and her attendant’s arm form a cross. He is placing (or, according to Churcher, removing) a gold plate from the table, but seems to have paused, his gaze fixed on the immeasurably valuable pearl. Cleopatra’s gaze, too, is directed at the pearl. While their arms cross, their gazes converge, but what different gazes they are. His head is tipped, and his eyes raised – a surreptitious looking. The look of a slave or a servant who knows too well the cost of being seen to be looking. And, perhaps, the look of a slave or servant who also knows only too well how the mighty Cleopatra and her consort have treated others with the same wasteful, careless disdain with which she treats the pearls. It is not only jewels, but also human beings, that Cleopatra has been ‘prepared to destroy in a totally arbitrary manner’.

And what about that other pair, on the edge of the painting. I mentioned before how perfectly his stance echoes that of his fellow slave/servant. They wear the same golden doublets, with pink lining inside their stiff, high collars, and short, slashed sleeves.. The same striped shirts underneath and, one presumes, the same golden leggings and plain shoes. Both appear to be wearing golden rings in their right ears.

While Cleopatra’s attendant is leaning towards the table with a gold plate in his hand, the subject on the far left edge of the painting has a silver plate under his arm. While Cleopatra’s attendant’s gaze is fixed on the central drama of the moment, the other servant/slave is engaged in a conversation with a dwarf, also, I think, a man of African heritage, in what appears to be a jester’s costume. The taller man’s arm seems to be suggesting the dwarf move forward, perhaps to the empty space at the front of the canvas, where he could perform for the feasters. The angle of his arm echoes that of Marcus Antonius’s, which is resting on the arm of his chair. As Churcher remarks, Antonius is ‘sitting back, superior and detached’ (151). And this tall fellow and his interlocutor seem, too, detached from the central drama of the pearl. Too concerned with their roles at the periphery of the action to bother with the antics of queens and potentates.

These three figures are some of the few non-white subjects in the historical works displayed on Level 2 of the NGV International. The only other I discovered was in the Rembrandt cabinet, and is part of a painting by seventeenth-century painting by the Flemish painter Jacob Huysmans (c. 1633-1696CE), Edward Henry Lee, 1st Earl of Lichfield, and his wife Charlotte Fitzroy as children. Another oil painting, though of more modest proportions, it was painted in about 1674. Charlotte was nine, and her fiancé ten years old when they were betrothed to each other: a politically expedient arranged marriage between the Catholic Lee (1663-1716) and the illegitimate daughter of Charles II and his mistress, Barbara Villiers. The painting has been in the NGV collection for only a few years, since 2012.
All very fascinating, but what interests me most is the third, unnamed, subject of the painting. A young man (I think) in a green robe, buttoned down the front, with pink silk lining. This subject is wearing a pair of drop earrings. Pearls which, if they are real, are as fabulous and valuable as the pair Cleopatra disposed of. While the two betrothed children face each other across a garden doorway, this third subject is turned away from the central drama of the painting. The plaque informs me that the peacock (a symbol of resurrection) and the gardener are subtly veiled references to ‘the Roman faith’. If so, our third subject is turning away from them, as is the horse with the golden bit in front of which he stands, towards some other point of interest outside the frame of the image.

The horse’s reins are hanging over the boy’s shoulder: I presume he is there to care for the horse and wait for his young master and mistress to require his services.

What are they looking towards, I wonder? They look … startled. Afraid. (That raised elbow and turned head, the shoulder lifted as if to defend the face, and the horse’s pricked ears and open mouth, its wild stare). Their gazes, like those of the Cleopatra and her attendant, seem to converge on some shared object, but this time, what the pale horse and the attendant look at is different. For one, their reactions seem alike, and it is also mysterious.

*The translation is by John Bostock, and was first published in 1855.