sixty-seven (The wise and foolish virgins)

The parable of the ten virgins (also known as the parable of the wise and foolish virgins) was enormously popular during the Middle Ages. There are sculptures of the virgins in many French and German cathedrals, including the Notre Dame de Paris and Strasbourg Cathedral.

Bach’s chorale cantata Wachet auf, ruft uns die Stimme (Awake, the voice calls to us) BWV140, also known as Sleepers Wake is based on Philipp Nicolai’s hymn with the same title from 1599. The cantata was composed to be played for the first time on the 27th Sunday after Trinity Sunday. Trinity Sunday doesn’t appear every year: it only occurs if Easter is early in the calendar. So Bach only performed this particular cantata once, on 25 November, 1731 (there was another 27th Sunday after Trinity in 1742, but according to the Bach biographer, Christos Wolff, he didn’t perform it on that day.

This stunning piece of music is composed of seven movements, and was written to be performed by three vocal soloists, a vocal choir, and a baroque instrumental ensemble (horn, two oboes, taille, violino piccolo, two violins, viola, and basso continuo, including a bassoon). The first, fourth and final movements are based on Nicolai’s hymn, and use Nicolai’s text (below). Bach transcribed the fourth movement chorale for organ (BWV 645) and published it alongside the Schübler Chorales.

Undated image of the virgins. Artist Unknown. Source unknown (!) Any idea where this image is from? I’d love to know …

The 27th Sunday has two prescribed readings. The first epistle to the Thessalonians (1 Thessalonians 5: 1-11) and the parable of the virgins (Matthew 25: 1-13). Nicolai’s hymn is based on the reading from Matthew:

Then shall the kingdom of heaven be likened unto ten virgins, which took their lamps, and went forth to meet the bridegroom. And five of them were wise, and five were foolish. They that were foolish took their lamps, and took no oil with them: But the wise took oil in their vessels with their lamps. While the bridegroom tarried, they all slumbered and slept. And at midnight there was a cry made, Behold, the bridegroom cometh; go ye out to meet him. Then all those virgins arose, and trimmed their lamps. And the foolish said unto the wise, Give us of your oil; for our lamps are gone out. But the wise answered, saying, Not so; lest there be not enough for us and you: but go ye rather to them that sell, and buy for yourselves. And while they went to buy, the bridegroom came; and they that were ready went in with him to the marriage: and the door was shut. Afterward came also the other virgins, saying, Lord, Lord, open to us. But he answered and said, Verily I say unto you, I know you not. Watch therefore, for ye know neither the day nor the hour wherein the Son of man cometh.

Nicolai was a Lutheran pastor in Westphalia. Between July 1597 and January 1598, the inhabitants of Unna were ravaged by what Nicolai called a ‘dreadful pestilence’. Over 1300 people died. In August, 1598, (in the preface to his to his Frewden-Spiegel) he wrote that:

… day by day I wrote out my meditations, found myself, thank God! wonderfully well, comforted In heart, joyful in spirit, and truly content; gave to my, manuscript the name and title of a Mirror of Joy, and took this so composed Frewden-Spiegel to leave behind me (if God should call me from this world) as the token of my peaceful, joyful, Christian departure, or (if God should spare use in health) to comfort other sufferers whom He should also visit with the pestilence … Now has the gracious, holy God most mercifully preserved me amid the dying from the dreadful pestilence, and wonderfully spared me beyond all my thoughts and hopes so that with the Prophet David I can say to Him “O how great is Thy goodness, which Thou hast laid up for them that fear Thee,” &c.

Nicolai’s hymnal text is in three parts (the slashes appear in the printed version). I’ve provided here the German, followed by Catherine Winkworth’s English translation from 1865: 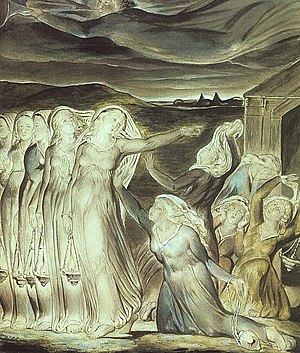 I
Wake, awake, for night is flying,
The watchmen on the heights are crying;
Awake, Jerusalem, at last!
Midnight hears the welcome voices,
And at the thrilling cry rejoices:
Come forth, ye virgins, night is past!
The Bridegroom comes, awake,
Your lamps with gladness take;
Hallelujah!
And for His marriage-feast prepare,
For ye must go to meet Him there.

II
Zion hears the watchmen singing,
And all her heart with joy is springing,
She wakes, she rises from her gloom;
For her Lord comes down all-glorious,
The strong in grace, in truth victorious,
Her Star is risen, her Light is come!
Ah come, Thou blessed Lord,
O Jesus, Son of God,
Hallelujah!
We follow till the halls we see
Where Thou hast bid us sup with Thee!

III
Now let all the heavens adore Thee,
And men and angels sing before Thee,
With harp and cymbal’s clearest tone;
Of one pearl each shining portal,
Where we are with the choir immortal
Of angels round Thy dazzling throne;
Nor eye hath seen, nor ear
Hath yet attain’d to hear
What there is ours,
But we rejoice, and sing to Thee
Our hymn of joy eternally.